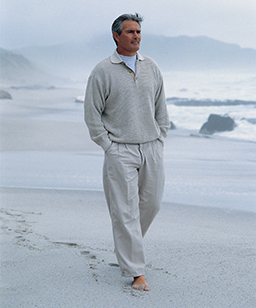 Prostate Brachytherapy, also known as a Radioactive Transperineal Prostate Seed Implant, is another method of delivering radiation using radioactive seeds implanted into the prostate. This form of therapy delivers photon radiation from the “inside-out,” as opposed to Intensity Modulated Radiation Therapy or Image Guided Radiation Therapy, otherwise known as IMRT/IGRT, which delivers radiation from the “outside-in.”

How is the seed implant performed?

Seed implants are performed as an outpatient procedure at one of several local hospitals or at one of the Advanced Radiation Centers multi-purpose facilities in Lake Success and West Nyack. The procedure is usually done with both your Urologist and Radiation Oncologist working together.  When you arrive for your appointment, the nursing staff will make you feel at ease. First they will see if you have any unanswered questions and prepare any paperwork; next you will meet with the Anesthesiologist. After you are comfortable, you will be taken to the procedure/operating room where you will be prepared for the procedure and given anesthesia. Once you are comfortably asleep, your Radiation Oncologist will begin the procedure by measuring the exact volume of the prostate in the treatment. Your doctor will then calculate the radiation dose needed based on that volume. Often this is done using a computerized planning system, which enables a 3-dimensional dose calculation. Once the number of seeds required has been calculated (which is typically between 30 and 130 seeds), the procedure can begin.

The Seed Implant process begins with your doctor placing small needles into the prostate gland through the perineum, which is the skin between the scrotum and the anus. The procedure is performed using real-time visualization of the prostate using an ultrasound probe that is placed in the rectum. Once a needle has been placed into the proper position within the prostate, the Radiation Oncologist is able to inject or “load” several radiation seeds through that particular needle, placing each one in an exact location.  That needle is removed, and another one is placed in a slightly different but specific position. Once this needle has been loaded and seeds delivered, the same procedure continues until the entire prostate has been implanted with the appropriately determined number of seeds.

Once the procedure is completed, and before the anesthesia is reversed, the Urologist will perform a cystoscopy, where the doctor is able to take a look into the bladder using a special scope inserted through the urethra. This brief examination confirms that no seeds may have been inadvertently placed into the bladder, and if they have been, the Urologist can remove them. The general health of the bladder walls is also inspected at this time. Once this process is completed, the Urologist may place a Foley catheter into the bladder through the penis, to allow urine to drain without possible obstruction, which can be caused by swelling that was introduced during the procedure.  Next you are taken to the recovery area where you will rest until you wake and are more comfortable; that could be up to an hour or two, if necessary. The Foley catheter may be removed prior to your going home, in which case the nursing staff will want to make sure that you are urinating on your own, or, the physicians may decide to send you home with the catheter, in which case, instructions on how to empty the collecting bag will be provided. In this case, the catheter would typically be removed in the next day or so, either at the urologist’s office, or at home with previously provided instructions.

Am I a Candidate for Seed Implant?

As a general rule, Seed Implants should not be performed if a patient has certain risk factors, such as a Gleason score of 7 or higher, a PSA above 10 ng/ml or in certain situations based on pathologic findings on biopsy (such as the presence of perineural invasion). The advantages of a Seed Implant are that the procedure only lasts an hour or so and it is performed on an outpatient basis. The disadvantages of a Seed Implant are that the side effects of the Seed Implant are more intense and longer lasting.  Also, radiation precautions must be observed during that period of time, which means patients must keep a three foot distance from young children and pregnant women. General anesthesia is typically used for the implantation process.

Are there any Preparations Prior to Having a Seed Implant?

You will be scheduled for a scan at one of Advanced Radiation Centers’ facilities several weeks before the Seed Implant procedure will take place. This scan typically takes only a few minutes to perform. You will be asked to schedule an appointment with your Internist or Cardiologist to get medical clearance and to ensure you are in appropriate health for the anesthesia and for the procedure itself. You may be required to go for pre-operative testing. A nursing coordinator or a staff member will provide you with full instructions about your procedure, information on the time / location you should arrive, and answer any questions you may have.

Can I Be Near Children After the Seed Implant?

You must keep a three foot distance from young children and pregnant women during  either six weeks (in the case of Palladium) or six months (in the case of Iodine). Cesarium is an additional seed implant used. Additional detailed instructions will be given to you when leaving the ambulatory center.  You will NOT set off alarms in the airport, however, you will be given a wallet card indicating the amount of radioactivity that was implanted in case you ever need to show another physician how much radiation was delivered.

Are There Other Precautions to Take After the Seed Implant?

You should avoid strenuous exercise for at least the first two weeks, and engage in only light exercise during the first week. Following the Seed Implant procedure, your Urologist may provide you with certain medications to take in the days or weeks following the implant to deal with any pain or urinary symptoms that you may have.

Some of the short-term side effects you may face in the days immediately following the procedure are: you may experience some soreness in the perineum-region where the needles for the implant were placed.  Typically extra-strength Tylenol is usually enough to ease any such discomfort.  Urinary symptoms can begin at this time as well. Your Urologist may give you medications to help reduce or relieve some of these urinary symptoms. Also, during the ensuing months, you may experience slight fatigue, as well as rectal symptoms. You may also notice blood in the urine, semen or stool, which typically will subside in 2-3 weeks.

Risks include erectile dysfunction, loss or diminution of ejaculation, rectal irritation and bleeding and urinary obstruction.

Your first visit with your Radiation Oncologist will be about six weeks following your Seed Implant procedure and several weeks after the post-seed scan is performed. After this first follow up, you will be seen by the Radiation Oncologist every six months for the first five years. During this time, a review of the PSA test that was performed by your Urologist will be made, along with a discussion of any possible symptoms you may be having. The Radiation Oncologist will also perform a physical exam which will give the physician important information. That information, along with the PSA test numbers, becomes an important predictor of how well things are going. The PSA is one of the more important “barometers” that help your doctor measure the efficacy of the radiation treatments months and years following therapy. It is equally important that routine follow-up appointments be made with your Urologist.