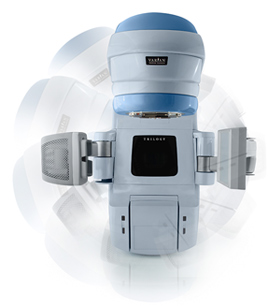 What is Stereotactic Radiosurgery (SRS)?

The word, Stereotactic, or “stereotaxy” comes from the Greek word meaning movement in space. This technique makes use of a three-dimensional coordinate system to locate small targets inside the body in which to perform some action using radiation or surgery. For example, if not using radiosurgery, neurosurgeons can use stereotactic surgery to target and remove or biopsy lesions within the brain. Stereotactic Radiosurgery is used primarily to treat cancers or benign lesions in the brain, spine and central nervous system. Since lesions in the brain are immediately adjacent to very delicate and important nerves and sensitive tissue, this procedure allows the Radiation Oncologists at Advanced Radiation Centers to use “pencil-thin” beams to target lesions using specialized high-precision radio surgical devices to deliver high dose radiation with sub-millimeter accuracy.

By using Stereotactic Radiosurgery, higher doses of radiation can be given with each treatment since the threat of collateral damage to neighboring tissues is minimized. The precision of SRS treatments with Trilogy is unmatched. Its pinpointed technology allows the cancer-destroying doses of radiation to zero in on a tumor within a very small area while leaving normal tissue right next to it virtually untouched. SRS is very effective for treating tumors of the brain, spine, and other parts of the body, especially those near sensitive tissue.

What Technologies are used for SRS at Advanced Radiation Centers?

Radiosurgery can be performed using several different radiation-producing “devices” including Varian’s state-of-the-art Trilogy Stereotactic Radiosurgery System. There are also the Gamma Knife and the Cyberknife devices.

How does Trilogy SRS stack up to other radiosurgery technologies?

The power of Trilogy yields shorter treatment times, making the experience more comfortable for the patient. Trilogy SRS is the only system that exists, which provides the ability to deliver SRS, IMRT, IGRT or DART radiation therapies. Combined with RapidArc Volumetric Arc technology, Trilogy SRS provides the most powerful and precise form of Stereotactic Radiosurgery that exists in any linear accelerator-based or non-based system.

Can other parts of the body be treated with Trilogy-SRS?

In theory, any organ system inside the body can be targeted and treated with Stereotactic Radiosurgery (SRS). However, the brain is really the only part of the body in which a highly reliable frame of reference can be used because the skull and its landmarks do not move or vary in 3-dimensional space relative to any point within the brain. Since it has been very difficult to create such a reference system in other parts of the body, SRS has historically been limited to the brain and spine. More recently, lesions in other parts of the body such as metastases, liver cancer, lung cancer, and pancreatic cancer have been treated with Stereotactic Body Radiosurgery as a definitive procedure.

What types of Brain Tumors can be treated with Trilogy-SRS?

Virtually all forms of cancer that affect the brain can be treated with Trilogy-SRS.
These tumors include:
Astrocytomas
Glioblastomas (Glioblastoma Muliforme)
Meningiomas
Germinomas
Gliomas

Metastatic Tumors that have spread to the brain from originating:
Breast Cancer
Colo-rectal Cancer
Lung Cancer
Other types of cancers

Is anyone with a brain tumor a candidate for Trilogy?

Using the state-of-the-art Trilogy technology is indicated primarily for the therapy of brain tumors, vascular lesions, and functional disorders. Type of cancer, size, and location of the tumor, as well as the age and general health of the patient are all important qualifications to be considered when deciding on the best course of treatment.

Why would Trilogy-SRS be used to cure rather than Surgery?

The average hospital stay for a craniotomy, which is another name for the conventional neurosurgery, is about 15 days. Radiosurgery costs less than conventional surgery, and with much less morbidity. The period of recovery is minimal from radiation treatment, and in the day following the treatment, the patient may return to his or her normal lifestyle, without any discomfort. The major disadvantage of radiosurgery in relation to open surgery is the duration of time required to achieve the desired effects. The major advantage of radiation surgery is obviously the non-invasive nature of the SRS system.

What is the process when undergoing Trilogy SRS at ARC?

Typically, a specialized MRI would be performed as well as a dedicated radiation planning scan during a planning session known as a simulation. Our on-site physics department would then spend a day or more working with the Radiation Oncologist, and often times a Neurosurgeon would create a dosimetry plan that models the way in which the radiation would be deposited within the tumor region. The appointment will take about an hour or more, although most of this time is spent preparing the patient by creating a highly accurate external “frame” device onto the skull. This ensures that reproducibility is maintained within the 3-dimensional coordinate system relative to the skull. The actual treatment using the beam of radiation only lasts for 2-10 minutes.

The highly precise radiation beams are targeted to the lesion, or area of risk within the brain by the Radiation Oncologist based on images, such as CT, MRI or angiography of the brain and body. The radiation is applied from an external source, under precise mechanical orientation by a specialized apparatus. Multiple beams are directed (collimated) and centered at the intracranial or extracranial lesion to be treated.