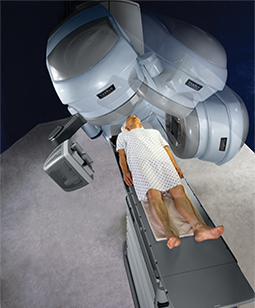 IGRT stands for Image Guided Radiation Therapy and is the most advanced technology to track cancer and spare normal tissues. IGRT technology decreases the radiation dose to normal tissue, thus decreasing side effects and improving outcomes. The physicians, technicians and staff at Advanced Radiation Centers of New York have the most experience using IGRT in the entire Metropolitan tri-state NY area. Our Radiation Oncologists are among the most experienced in the world using this extremely advanced state-of-the-art technology. We are the first in New York State to use RapidArc, which is made by Varian, the world-leading manufacturer of machinery and software to treat cancer with radiotherapy. RapidArc is the most sophisticated radiation treatment for cancer available in the world.

How does IGRT work?

Before the radiation beam is turned on, ARC physicians use Image Guidance technology to provide precise and exact information on the specific location of any soft-tissue or bony target. Having more precise location information, means a smaller radiation field can be used; so there is less chance the radiation will zap healthy neighboring tissue near to the tumor. That means less damage to healthy tissue, less “collateral damage.” Similar to the Cyber Knife, IGRT is like a “high-precision laser scope” that makes the radiation more precise and extremely accurate.

What types of cancers are treated with IGRT?

Of course, most cancers benefit from treatments that are more accurate and precise. Tumors of the brain, head and neck region fare well when treated using IGRT because the technology ensures that the delicate tissues, such as the spinal cord and salivary glands, remain away from the high dose region. Here, Image Guided Radiation Therapy is used in conjunction with other ARC technologies, such as Cyberknife radiation or Stereotactic Radiosurgery (SRS) and Intensity Modulated Radiation Therapy (IMRT).

Radiation derives a significant benefit from Image Guided Radiation Therapy.  As the bladder fills and empties, the prostate gets pushed and pulled and will be in different positions for each day of radiation treatment. IGRT is used to detect “fiducial” Gold-Markers in the seconds before the treatment is given, to ensure perfect targeting. The physicians of Advanced Radiation Centers have extensive experience in treating prostate cancer with Gold-Marker Image Guidance technology for each day of radiation treatment.

Treatments benefit from IGRT and other ARC technologies such as Respiratory Gating and IMRT by taking the breathing motion into consideration, and decreasing doses to the underlying sensitive tissues and organs, such as the lungs and heart. Lung Cancers are tracked using Respiratory Gating, a form of IGRT that tracks a tumor using 4-Dimensions, allowing ARC’s physicians to know the location of the lung tumor despite its constant moment-to-moment movement. IGRT can ensure that the head and neck position is so precise that doses to the spinal cord and vital organs can be significantly reduced or eliminated.

Proton therapy is a type of external beam radiation where a proton beam is used to deliver the radiation. Up until just a few years ago, there were only two locations in the US, and only a handful in the world, where proton therapy was being used because a very large accelerator was required to create the proton beam. It required a facility that was larger than a football field. These facilities were typically part of a scientific and academic university setting. Protons have an interesting inherent property in that they can be stopped at basically any depth within the body. This made it an excellent treatment for certain tumors, mostly those affecting children or certain tumors of the eye.

Several things have happened in the last few years that have seen a renewed interest in using proton therapy for prostate cancer therapy.  The advances in computer technology catapulted x-ray radiation therapy into being a true curative cancer therapy. Newer technologies such as Intensity Modulated Radiation Therapy, or IMRT, and Image Guided Radiation Therapy, or IGRT, paved the road for using radiation, and not surgery for example, as a primary, less invasive treatment for prostate cancer in the last 10 years. In doing so, the overall market for prostate radiation has grown. This growth has attracted the venture capital community, which has billions of dollars to invest – and what better place to invest than in a $200-million proton therapy facility… and is there a better type of cancer to target a business plan toward than prostate cancer?…since it is the most common cancer in men… probably not. So now with Wall Street behind it, several more proton centers have opened, and there are now plans for at least 15 new proton facilities to be built in the next few years.

The problem with this explosion of proton facilities is that there is no longer a benefit to proton therapy when compared to the newer x-ray technologies of IMRT and IGRT. This “smoke and mirrors,” which is fueling the proton therapy business has been the subject of many investigative reports in the New York Times and other print media, as well as medical journals (see our website for the articles), which clearly state that there is no benefit to protons over photons, and at the expense of the taxpayer, Wall Street is pushing a high cost therapy when a much more cost-effective, and equally effective therapy exists in IGRT. The other real problem is that there is only one significant study using proton therapy in the treatment of prostate cancer, compared to hundreds and hundreds of studies of IMRT and IGRT. Until such studies exist, and many believe those studies may never happen for lack of funding, since the groups backing the funding of the proton facilities may not want to be stuck with the bill if the studies show that protons are NOT as good as IGRT, the jury is still out as to the efficacy of protons as a treatment for prostate cancer.

Calypso is typically used by Radiation Oncology facilities with older radiation accelerators, which cannot be upgraded to the latest imaging devices like the On-Board Imager (OBI). Only accelerators that are 10-15 years old cannot be fitted with an OBI, like we have at Advanced Radiation Centers. Calypso was created just for these older machines so facilities would not have to upgrade their existing equipment. Any facility that has a Calypso, you will know also has an older machine. Older machine = older technology. The Calypso is a stand-alone unit that can be used alongside the older non-upgradable linear accelerator.

Unlike the Gold Marker IGRT Technology , which is very visual and easy to read, Calypso provides NO images. It only provides numbers on a screen. The Calypso also provides no prostate, rectum or bladder volumes, and does not have the ability to use images to make specific changes in targeting. Since there is no image or view of the actual anatomy at any given moment, Calypso is at a major disadvantage compared to the linear accelerator-based technologies. Calypso is only good if the facility only has an older linear accelerator.

With On-Board Imaging (OBI) technology the prostate itself, along with the bladder and rectum, are actually viewed prior to every treatment to ensure that the anatomy perfectly lines up with the treatment. This is a much better gauge than lining up numbers on a computer, as the Calypso provides.

Tomotherapy is basically Intensity Modulated Radiation Therapy (IMRT) using a limited type of delivery machine, which is similar to a modified CT scan machine, rather than the more versatile linear accelerator. It is unclear what advantages, if any, tomotherapy treatments may have over conventional IMRT. However, what is clear is that with the introduction of RapidArc Rotational Volumetric Radiation Therapy, which can now deliver a rotational arc IMRT treatment using a linear accelerator, Tomotherapy treatments no longer have any type of advantage, and in fact, may have some comparable disadvantages. Those disadvantages include: much less long-term treatment history compared to linear accelerators, the need to spirally treat an organ, which may end up overdosing certain structures of the body with too much radiation than is necessary, and much longer treatment times each day (up to 40 minutes per day with Tomotherapy as compared to about 90 seconds with RapidArc).

The Cyberknife machine is a technology that was initially envisioned for treating only brain and spine cancers, much like the Gamma Knife. IGRT stands for Image Guided Radiation Therapy, which utilizes the same basic concepts as Cyberknife radiation therapy. LIke the Cyber Knife, IGRT delivers therapeutic radiation ina precise manner. However, the only type of radiation that Cyberknife radiation delivers is called Stereotactic Radiosurgery, or SRS, which when used in other parts of the body is called Stereotactic Body Radiation Therapy, or SBRT. SBRT treatments can only be done in five treatments or less, or it will not be reimbursed by insurance companies.

Although Cyber Knife delivers a shorter and more potent form of radiation versus standard IGRT, many patients may be more safely and effectively treated with gentler conventional course of IGRT. In some cases, both Cyberknife and IGRT are used simultaneously. The treatment of Cyberknife radiation and/or IGRT can be determined by our skilled physicians during the evaluation process.

Although it is not currently on their website, up until 2011, the American Association of Therapeutic Radiation Oncology or ASTRO, issued a policy statement specifically stating that stereotactic radiosurgery for prostate cancer does not have sufficient data to be considered as an alternative to conventional and standard radiation treatments. The position stated that “There is not sufficient or mature data to demonstrate equivalency to existing standard treatment modalities and, in our view, SBRT for prostate cancer patients does not represent a ‘standard of care.’ SBRT for early stage, low-intermediate risk prostate cancer should be further tested within the context of appropriately designed clinical trials.”

Advanced Radiation Centers of New York is proud to have stereotactic radiosurgery technologies and uses these technologies in the appropriate treatment of lung, brain and spinal tumors. However, given the lack of substantial and 10-to-15 year data to support its use in prostate cancer, ARC does not believe that SBRT is appropriate for the localized prostate cancer. ARC has treated more than 3,000 men with Image Guided Radiation Therapy, IGRT, and continues its commitment to be leaders in the treatment of all cancers. ARC also continues to ensure that its treatments are not in the experimental realm.