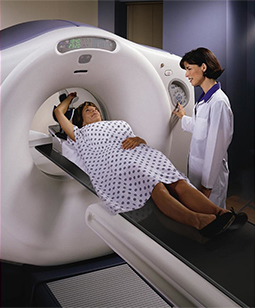 Brachytherapy means “close” therapy. Breast brachytherapy involves placing a small radiation source into the breast, close to the tissue at risk. The source stays in a specialized catheter (SAVI, Contura or Mammosite) for a short period of time (several minutes), delivering radiation in and around the site of
the surgery. At one end of the device is a balloon-type apparatus, which is filled with a saline solution that takes up the space of the lumpectomy cavity where the tumor once was. Also inside the balloon is a hollow catheter that extends out of the breast. The catheter can be attached via a transfer tube to the HDR (high dose rate) unit which houses the radiation source. Under computer guidance, the HDR unit sends out the small radiation source through the transfer tube, and then into the catheter of the balloon device, where it stays at one or more different positions for a set amount of time. It will give the precise amount of radiation based on the Radiation Oncologists’ prescription.

What Type of Catheters Are Used During Breast Brachytherapy at ARC?

For many years, the only breast HDR (high dose rate) catheter was called the Mammosite device.  Physicians at Advanced Radiation Centers of New York (ARC) were among the first in the Metropolitan New York area to use this device. Newer catheters have become FDA approved and can provide improved radiation dose distribution to the breast tissue.  We are now able to provide better “shaping” of the radiation to avoid normal tissues – so the outcomes can be even more superior than in the past.

The SAVI device is the latest type of catheter that utilizes conformal catheters to deliver radiation and provides a high level of versatility allowing more women to have partial breast irradiation (PBI). ARC is a Center of Excellence for the SAVI catheter.

Improving on the older balloon-based systems is the Contura MLB (multi-lumen balloon). ARC is proud to be among the first in metropolitan New York to perform breast PBI (partial breast irradiation) with the Contura device.

Am I a Candidate for Breast HDR (high dose rate) Radiation?

Women who have had a lumpectomy for early stage breast cancer may be candidates for Breast HDR (high dose rate) Radiation. The decision will be based on further information, such as whether lymph nodes were involved, what types of cells the cancer was made of (lobular or ductal), shape and other characteristics of the lumpectomy.

If I Choose to have Breast HDR, what are the steps?

Catheter Placement: The Breast Surgeon or Radiation Oncologist will place the catheter during a 5-15 minute office procedure using ultrasound guidance. A small “nick” is made in the skin under local anesthesia and the catheter is placed into the lumpectomy cavity where the balloon is inflated using saline solution.

Initial Simulation: Your next appointment will be within 24-48 hours where a scan will be performed and a more detailed evaluation of the catheter placement within the breast will be made. These images will be used to plan the positioning of the radiation source within the balloon.

Daily Treatments: Treatments are given twice a day, for five days. Each treatment is usually separated by at least six hours. Each daily treatment lasts approximately 4-10 minutes. You will not feel any pain or discomfort during the treatment. Once completed, the source will be retracted automatically into the HDR unit. You would then return for your second appointment later that day, for a total of ten times over five days.

Catheter Removal: After the 10th and final treatment, your Radiation Oncologist will deflate the balloon, making it possible to remove the catheter from the breast. That process takes only a few seconds. The small incision from the catheter will heal within a few days.

What are the Side Effects of Breast HDR (high dose rate) Radiation?

Radiation is not expected to cause any significant side effects. There can be some discomfort, but no significant pain should be expected. Patients can experience mild fatigue, which can last a number of weeks. Redness of the skin which lies near the area where the catheter balloon is in the breast can occur.